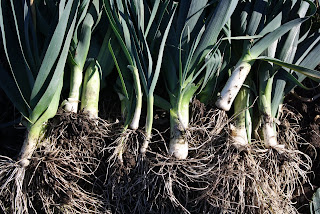 We discovered leeks for the first time last year.  It was late spring when we stumbled across a container of leek seedlings on sale for less than a dollar.  We had never grown leeks before and never really felt a desire to plant them - but we decided to go for it anyway.  We stuck them in the ground in late June and never thought much about them.  In late September, just before the plots were about to be turned over, we harvested our leeks.  And that's when it happened - we fell in love with leeks!  Yes, even me, the non-onion lover, loves leeks.  We fried them in butter, we put them in stirfries and we made potato leek soup.   Trust me, there's nothing more scrumptious than a steaming bowl of potato leek soup on a crisp autumn night.

This year, we purposefully searched for leek seedlings at the garden centre.  We also got more information about planting leeks - now that we know how delicious they are, we don't want to take any chances.  Here's what we discovered.

Leeks are...
To plant seedlings: 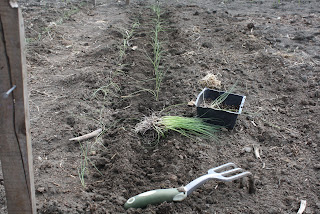 To harvest:
We'll keep you posted on our leeks and share some recipes in the fall.
Wish us luck!
Posted by Getty Stewart at 9:06 PM
Email ThisBlogThis!Share to TwitterShare to FacebookShare to Pinterest
Labels: Gardening Tips, growing leeks, leek seedlings, leeks, Planting