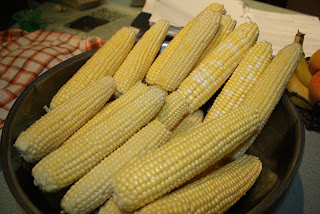 I still remember my first corn on the cob.  It was the summer of 1977 and my family had just immigrated from Germany.  In that first summer, our new friends and neighbours offered us some of their home grown corn.  My mom, while very polite and gracious, was silently aghast at the thought of eating cattle feed.  My parents had been growing corn in Germany their entire life - they knew corn was strictly for the animals.

Imagine our surprise when we took that first bite of a sweet, golden cob of corn glistening with melted butter. It made the move to Canada even sweeter!  We've been growing and enjoying sweet corn ever since.

Now, it's time to harvest this year's crop.

We planted three varieties as explained in an earlier post.

So far, we've had the Canadian Early Supersweet Hybrid and the Peaches and Cream Bicolour.  While we really like the look of the peaches and cream, we all agree that the Supersweet Hybrid is our favourite.  It truly is super sweet. Although, we wouldn't call the Peaches and Cream cattle feed!
Our staggered seeding seems to have worked.  The Honey and Cream corn will be another 5 days or so until it's ready to eat.
We took the risk of cross-pollination by planting the different corn varieties right next to each other.  That doesn't seem to have had a negative result this year.  However, we did plant our rows too close together.  It's difficult to get  in between the rows and the cobs in the center aren't developing as nicely as the ones the outer rows.
Note to Self: Leave recommended space between rows!
Posted by Getty Stewart at 8:55 AM
Email ThisBlogThis!Share to TwitterShare to FacebookShare to Pinterest
Labels: Harvesting, Manitoba Garden, sweet corn