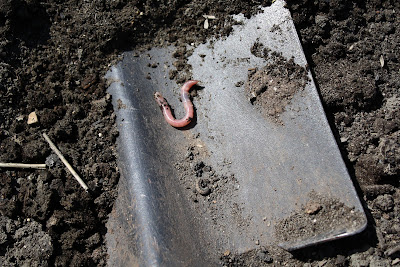 I know some of you have been waiting for this year's worm photo, so here it is!

Digging in the garden almost two weeks ago, I found these two worms, perfect specimens of what you do and don't want in your garden.

That pink earthworm is great for the soil.  As it wriggles through the soil eating and pooping organic matter it aerates and mixes the soil - exactly what we need for our gardens.  Charles Darwin recognized the benefits of the earthworm when he wrote:
"It may be doubted whether there are many other animals which have played so important a part in the history of the world, as have these lowly organized creatures. "


Then, there's the cutworm who eagerly cuts down just about anything green early in the spring.  About the only thing they don't seem to "cut" is quack grass!  At least if they did that, there might be some obvious benefit for having them around.

You know you have cut worms when you see your plants sawed off at the soil line.  Dig about an inch around the plant and you're likely to find a very fat, grey worm with a dark stripe down the side.  If he gets disturbed he'll curl into a tight c shape.  You know he's the culprit if he's plump and looks a little green.  In our garden, if we find them, we destroy them.  Not very zen like, but then neither is killing our innocent plants! 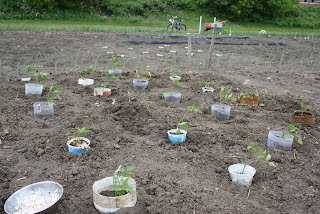 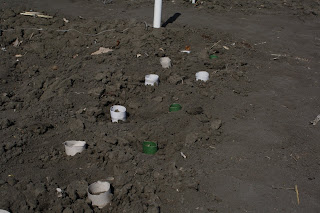 What I discovered last year was that the garlic and leeks that were chewed by the cutworms survived and regrew.  However, single stem plants like beans, peas and tomatoes were instant goners.  If the stem got cut, that was it for the plant.  Soooo, this year, I think I won't put collars on the garlic, onions and leeks in the hopes that they'll bounce back.  Protecting rows of beans and peas is tricky, so I'll just plant extras of those. Our tomatoes and peppers will definitely get collars again.  We'll start saving big round containers now.

My mother taught me a trick to prevent cutworms from destroying those precious tomato transplants. Put a couple of toothpicks right next to the stem when you first put them in. The cutworm can't curl around the stem because the toothpicks are in the way. The toothpicks have to be very close to the stem or the cutworm can get between the stem and the toothpick. We've lost a few plants over the years because we haven't been diligent enough. Give it a try.

If you cut off the bottoms of 2L pop bottles you can put them over the young plants. It does double duty as a collar for cutworms and a homemade cloche.