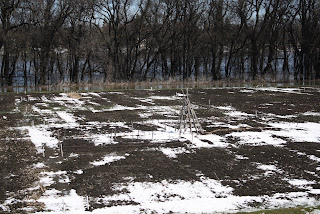 Here's a photo of our community garden plot on May 2, 2011. Notice the swollen Red River in the background.  The snow is what is remaining of about 5cm that fell on May 1 with temperatures at -12.


The Red River is expected to crest in Winnipeg within the next couple of days, and although water levels won't be as high as they were in 2009, flood officials say they can't relax just yet.
What's different with this year's flood is the volume of water. A greater amount needs to flow through the city, up north, before it drains into Lake Winnipeg, so water levels will remain high in the city for weeks.
Officials also said if there is a heavy rain, many people could see flooded basements.
The crest will be about six metres at the James Avenue monitoring station, about one metre below the 2009 level.
So, while our plot probably won't be flooded, it looks like we have some more drying and warming up to do before we get planting in earnest
Posted by Getty Stewart at 1:28 PM
Email ThisBlogThis!Share to TwitterShare to FacebookShare to Pinterest
Labels: May snow, Winnipeg flood 2011, Winnipeg Red River flood