Smutty Corn - Not as bad as it looks

"Oh no!  There's a growth on our corn and it doesn't look pretty.  Quick toss it out before it spreads." 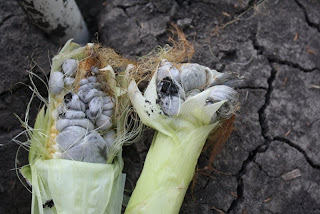 I was pretty sure that anything that looked that nasty was bound to be dangerous to consume and so I immediately got rid of it.

When I came home, I looked up corn smut and discovered that it's a delicacy that's actually more nutritious and more valuable than the corn it grows on.  Go figure!  Check this out....

For full article visit the MSNC's Corn Smut Article.  Then, if you'd like to get a good deal on some corn smut, just leave me a message in the comment section!

IRAPUATO, Mexico — It's now an established scientific fact: Smut is GOOD for you. Corn smut, that is.
For years, scientists have assumed that huitlacoche (WEET-LA-KO-CHEE) — a gnarly, gray-black corn fungus long-savored in Mexico — had nutritional values similar to those of the corn on which it grew. But test results just published in the journal Food Chemistry reveal that an infection that U.S. farmers and crop scientists have spent millions trying to eradicate, is packed with unique proteins, minerals and other nutritional goodies.
And here's a bonus: agro-economists have found it can sell for more than the corn it ruins.
"We had no idea huitlacoche could actually synthesize significant nutrients that don't even exist in corn," says Octavio Paredes-Lopez, one of Mexico's leading food scientists.
"Who cares about the nutritional value? The flavors are amazing!" said Steve Sando, a grinning Napa Valley epicurean whose booming Rancho Gordo speciality food company grows and sells heirloom beans, corn and other indigenous "New World" ingredients.
.... read more here

That is some scary looking corn. Have to say I've never heard of corn smut. I googled pictures of it and was fascinated. It's like an accident, you don't really want to look at it, but you just can't help it.

I also found this:
http://www.thesneeze.com/mt-archives/000344.php
and laughed my butt off at his review.

I find myself wondering why someone decided to eat the smut in the first place...makes me think of Zombie Corn.