Written by Leanne, Homegrown Tomato Lover and Small Space Gardener
Tragedy has struck my garden! Sorry to be so melodramatic, but it’s true… There is nothing more important to me in the garden than tomatoes. There is just no possible competition for a home grown tomato! Over the past few years, with all the challenges of not having my tomatoes in my backyard, I was able to come to terms with the fact that my tomatoes were, at best, mediocre. They didn’t taste as good as I know garden tomatoes can taste, and the past two years they have been stricken by late blight. Not pretty. 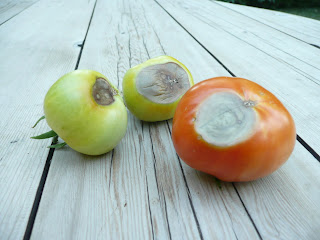 This year was going to be my year for tomatoes! Having them in the backyard garden, with brand new blight-free soil… heaven! But… we had a real heat wave in July. I took some website advice that said not to water my garden more than once per week because that would just encourage shallow root growth. Hmmm… that advice didn’t work for me. Not only is my lettuce bitter and inedible, but my beans are not very productive, my cucumbers are mostly shrivelling on the vine, and worst of all, my tomatoes seem to have developed blossom end rot, which I understand occurs due to inconsistent watering.
Now I’m watering about every second day (unless there is a significant rain, but that has been elusive this summer), so I’m hoping to prevent the rest of my tomatoes from succumbing to the same fate. So far, it is only the Manitoba plant showing the signs –most of my plants are Bush Champions, so we’ll see how they make out… I’m hoping they are more drought-hardy. I don’t think there’s anything I can do about it once it sets in.
Posted by Getty Stewart at 1:44 PM
Email ThisBlogThis!Share to TwitterShare to FacebookShare to Pinterest
Labels: blossom end rot, bush champion tomatoes, Manitoba tomatoes, small space gardening, watering

Aww, I'm sorry about your garden. Nothing worse than putting in all that work to have things go awry.

This heat has been beyond normal, and I think if we'd had regular weather, once a week watering may have been fine. Though in my raised beds, in normal years I water every 3rd day or so-depending on rain.

I have pails with tomatoes in them, and with the heat, they've developed blossom end rot-and that's with a deep watering every morning! I just pulled those tomatoes off and gave them to the dog. Now that we aren't having the scorching heat, the newer tomatoes on the plants seem to be doing better. I did give them a good drink of compost tea last week, so that might have something to do with it.

Hope your other tomatoes do better!

Thanks, WolfSong. This year has been an experiment, so I will keep your watering advice in mind for next year. Interesting about the compost tea -- that's not something I've tried yet. After reading your comment, I Googled it, but must admit I didn't realize it was such an involved process -- I was envisioning steeping some compost in water for a certain amount of time, and then straining it out, and voila!... but the website I was looking at lost me at "aquarium pump". More research required...

I did my compost tea steeped in a bucket over night-with a lid to keep the dog from drinking it!-and then strained, diluted for tomatoes, and full strength for pumpkins.

I saw those how-to's with the pumps and adding sugar to get it going and all that, but I just can't be bothered with that whole process. The easier the better, I says! ;)