Who's Been In Our Garden?

As I approached the garden I saw glimpses of red in the pepper patch.  Was it possible that the red peppers were ready?!  Upon closer inspection, I realized the red was a sign of trouble - something had gotten to our peppers, there were unmistakable nibble marks on several peppers and tomatoes. 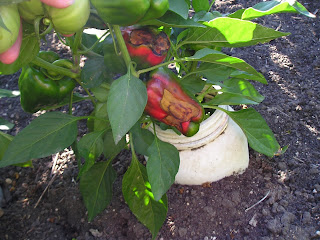 I took a few more steps into the garden and heard a rustling in the bean teepee.  Suddenly, this squirrel emerged and started chittering at me demanding that I get out of his space.  Hmph!  How do you like that? 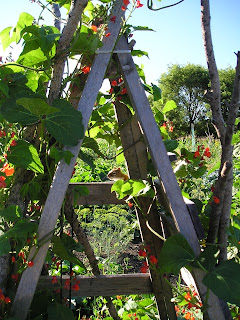 Well, I told him a thing or two!
Now that the kids, Mars (our fearless little Bichon/Poodle) and I will be visiting the garden regularly again, I hope we can once again establish ourselves as the rightful owners of our garden and clear out any spots that might appeal to a squirrel looking for a home.
Posted by Getty Stewart at 8:17 AM
Email ThisBlogThis!Share to TwitterShare to FacebookShare to Pinterest
Labels: garden squirrel, Pest Control, squirrel in garden

Little stinker! Great picture of him though. :-D