Thanks to Fruit Share I've had the chance to pick a few apples.  I've been using these apples to test various recipes to include in the Guide to Backyard Fruit that I'm putting together.  Of course a classic apple pie recipe is a must. 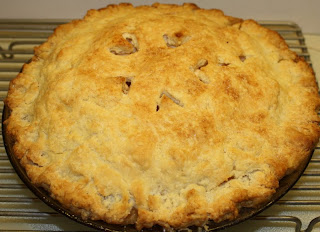 Usually, I would "wing it" and loosely follow whatever pie recipe I stumbled across.  But this time, I had to record every nuance and address any possible question that someone might have.  So I began experimenting.  Several pies later, here's my take on apple pie made with delicious prairie apples.

Apple Pie
A fantastic apple pie recipe with a flaky, tender crust and a filling with soft apples coated in a light, thick sauce. This is the way apple pie was meant to be.

Crust
Sift together flour, salt and sugar in a large chilled bowl.
Use a pastry blender to cut in butter and shortening until crumbly.
Sprinkle vinegar and the smallest amount of water over the flour mixture.
Mix with a fork just until ingredients come together to form a ball.  If needed, add a drop of water at a time until ingredients stick together.
Pat into a flat ball, wrap in plastic wrap and refrigerate for 30 minutes or longer.

Assembly
Preheat oven to 450˚F.
Place oven rack in lowest position.
Divide dough into two pieces.  Leave one piece in the fridge.
Lightly flour a rolling pin and section of counter top.
Roll dough into a 12 inch circle. To prevent sticking, lift and turn tough frequently.
Fold the dough over the rolling pin and transfer to pie plate.
Brush bottom of dough with soft butter to prevent filling from making bottom crust soggy.
Pour filling into pie.
Roll out other piece of dough.
Place the top crust over the apples.
Tuck excess pastry under the bottom crust and crimp the edges using fingers or a fork.
Make five vents in the top crust to allow the steam to escape.
Place pie on lowest rack of oven and bake at 450 for 15 minutes.
Reduce heat to 400, cover edges with aluminum foil and bake for 30 minutes.
Remove from oven and rest for 2 hours.
Serve with vanilla ice cream.

One Recipe, Three Variations
I tried this recipe using...
The result...?

Each method worked, but the end result was a little different.

Fresh Apples
This pie was a classic. The texture of the apples and the not-too sweet sauce were just right for this flaky crust. Frozen Apples Thawed
I left the apples to thaw overnight in a colander so the liquid could drain. They lost a considerable amount of liquid, which I did not incorporate back into the pie. I went from 7 cups of frozen apples to 4 1/2 cups of apples. I followed the recipe as shown with the 4 1/2 cups drained apples replacing the fresh ones. This pie cooked up very nicely. The filling was very dark and soft, there were no real apple pieces left. Because I did not reduce the sugar in the filling, it tasted sweeter than the other fillings.  Also, the reduced volume of apples left this pie a little concave.

Frozen Apples Not Thawed
I took 6 cups of frozen apples directly out of the freezer and mixed them with the filling ingredients. I did add an extra 1/2 Tbsp of cornstarch and baked it an extra 5 minutes at 350 degrees.  The outside of the crust was crisp and flaky, but there were some undercooked parts on the inside (nobody else seemed to notice, but I looked very carefully). The apples held their shape and were only slightly softer than the fresh apples.  Next time, I would extend the baking time by another 5 minutes.

These pies were tested by 10 people.  Everyone agreed they would be happy to eat any of the three variations.  When pushed for a choice, the ranking came out as follows:
1. Fresh Apples
2. Frozen Not Thawed Apples
3. Frozen Then Thawed Apples


As a baker, I'm thrilled to hear the frozen, not thawed apples worked out so well - I love the fact that I can eliminate the thawing stage.  Now I can freeze any extra apples and know that I have a great recipe for this winter.

If you make apple pie - people will eat it!  There's really no need to fuss too much, but if you're interested, here are a few pie tips I've picked up along the way.