Its mid-September and the "risk of frost" warnings are being posted by Environment Canada.  How do you react?  Do you...


What ever you do, we all know the end is near.  Cooler days and colder nights mean that those warm season veggies will soon be finished.  In fact, some will virtually stop all growth at 10 degrees Celcius (50 degrees F) and then if they're hit with extended periods of frost (an hour or more of frost) the plants will die completely.

But don't despair!  Now's the time to look to those cool temp veggies and enjoy them to the fullest.

In case you're wondering, here's a chart showing the frost tolerance of common herbs and veggies.

What did I do?  Well, the first night I hummed and hahed all evening while my husband was encouraging me to roll the dice and let nature decide.  By 9:30pm I couldn't stand it any longer and I raced down to the garden with a few blankies.  Of course, it was very dark down by the river.  And, I realized four blankies weren't enough to cover half of what I needed to cover.  So there I was, with only the moonlight to guide me, picking peppers and as many tomatoes as I could. 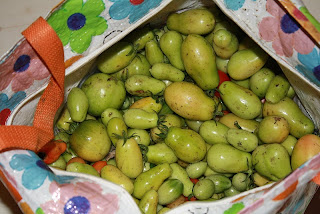 By the second night, I tossed in the towel and picked the rest of my green tomatoes (no patience for hauling blankies to and from the garden).  I came home with a 30lb bag of them.  There was a brief rain an hour before, so unfortunately my tomatoes were damp and dirty.  When I came home, I sat in the kitchen drying my tomatoes, while Melanie was doing her "new math" homework. I'm not sure which one of us had the worst task!

Whatever you decide - Good luck!

Posted by Getty Stewart at 7:46 AM
Email ThisBlogThis!Share to TwitterShare to FacebookShare to Pinterest
Labels: fall frost, first fall frost in the garden, frost tolerance of veggies, green tomatoes, Harvesting

That's almost exactly what I did, too! Last night I picked all the tomatoes, in the dark, by flashlight. REALLY froze my fingers. Glad I did it though, it was a hard frost last night.

I covered what I could and left the rest to take the chance. Normally, I cover faithfully, but this year...I just don't have it in me to worry about the garden. If it frosts, it frosts, if it don't, it don't. I'm just not going to let it stress me. ;-)

Preserving garden veggies is great, but preserving your sanity is much more important!