There's a Beetle in My Spinach

At this time of year, I'm usually enjoying my first garden grown spinach salad.  In the fall, I sprinkle some spinach seed in the garden, confident that it will sprout and produce a wonderful crop before I've even gotten a chance to seed anything else.  It's worked in the past couple of years.

Here's a look at this year's salad fixin's: 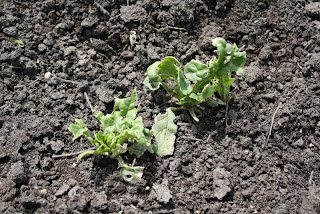 Clearly, I'm not having spinach salad any time soon.  Somebody has been devouring my spinach and I know who did it! 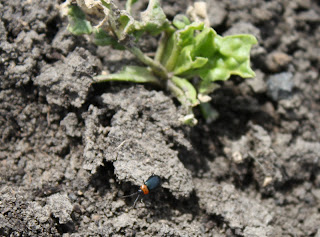 It's this black beetle with a red, horizontal stripe and long antennae.  There were several of them on and around my plants.  They're "hoppers" that tried to make a quick get away.  Some of them were even trying to make more beetles - if you know what I mean.

Does anyone know who these guys are and what to do about them?  Anyone know what else they eat?  Do they have the same dietary preferences as flea beetles?  Will they eat my cabbage patch plants?
Posted by Getty Stewart at 9:24 AM
Email ThisBlogThis!Share to TwitterShare to FacebookShare to Pinterest
Labels: beetles, flea beetles, spinach

Hello I recently stumbled upon your blog and love it!
I cant answer the questions you posed but I have one for for you!
Do you know if it's possible to grow sweet potato in this area? (I live just outside city limits) My sister asked me but I have no idea..

Hi Mary,
Glad you stumbled by and are enjoying the blog!
Great question about sweet potatoes. I don't know if we can grow them here, if we can I don't know a lot of people who do. Let's ask around and see if we can find an answer.
Anyone know?
Getty